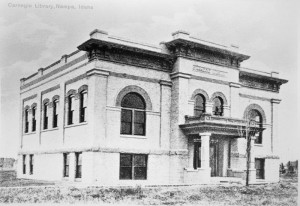 The Nampa Public Library has served the Nampa community in various ways since our beginnings in 1900. Between 1900 and 1907, the Woman’s Century Club and Nampa City Council worked to develop funding and gather donations of books and furnishings to start the city’s first public library. The first paid librarian, Ennis McGee, started work in 1907 with a $25 a month salary, and the doors to the first library opened in March 1908.

The Nampa Public Library spent many happy years in our first location on 2nd Street, but we were happy to move into our new home at 11th Avenue in 1966. The building was donated by First Security Bank, and various community organizations donated to renovate and remodel the building for our purposes. The skylight was restored in 1978. 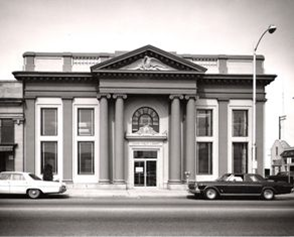 The checkout process at the Nampa Public Library was computerized in 1980, joining us with the Boise Library and other libraries in the valley in what is now called the Lynx! Consortium. As part of the Nampa Centennial Celebration in 1985, the library expanded to the building next door, doubling our size. Ten years later in 1996, the library provided internet access to patrons for the first time, digitized our catalog, and began to take part in a courier service between the Lynx! Consortium libraries in the valley. We later beefed up our public computing resources and internet connection when the Bill and Melinda Gates Foundation donated over $40,000 in 2000.

In 2003, the Library Strategic Facilities Plan clearly outlined the need for a new central library buildi 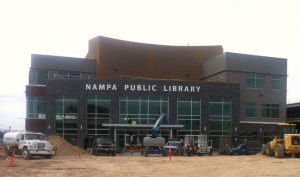 ng for the City of Nampa and our well over 1,000 patrons per day. The Nampa City Council voted to proceed with the Nampa Development Plan in 2005, providing a devoted funding stream for the new library. In early 2013 we saw the demolition of former buildings on the new Library Square as well as the groundbreaking ceremony to kick start construction.

The new Nampa Public Library building opened to the public on March 14, 2015, with a turnout of 8,420 people! The new building nearly triples in size and capacity in comparison to the old building; as well as providing a new community beacon for celebrating the City of Nampa. The Parking Garage is free for the 1st hour. If you’re coming to pick up items from the Express Holds Pickup Window, you can park in the garage or pull up to the parking spots on 3rd St. S.

This library is a member of the Lynx Library Consortium.

The Lynx Library Consortium is a partnership between twelve city and district libraries in southern Idaho to share an online catalog, services, and variety of materials members may borrow, reducing costs and barriers to access for all.